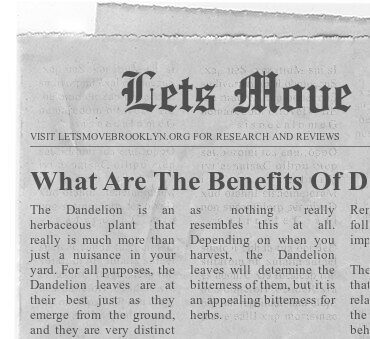 The Dandelion is an herbaceous plant that really is much more than just a nuisance in your yard. For all purposes, the Dandelion leaves are at their best just as they emerge from the ground, and they are very distinct as nothing really resembles this at all. Depending on when you harvest, the Dandelion leaves will determine the bitterness of them, but it is an appealing bitterness for herbs.

These leaves that are considered an herb blend nicely with salads and do well either sautéed or steamed. Many claim the taste is similar to that of the endive. People who are into eating the fruits of nature claim that it is perfectly acceptable to eat the Dandelion flower as well. Some claim that they make outstanding fritters if they are battered up and fried and make a colorful contribution to any stir fry. What Are The Benefits Of Cilantro?

Known For Strengthening The Entire Body, Especially The Liver And Gallbladder, Because It Promotes The Flow Of Bile

Traditionally it can be made into a tonic that is known for strengthening the entire body, especially the liver and gallbladder, because it promotes the flow of bile. Dandelion root contains taraxacum, so it reduces the inflammation to the bile ducts and reduces gallstones. It is commonly used for Hepatitis, liver swelling, and jaundice. It also helps with indigestion.

This plant also goes by the French name, Pissenlit. Ironically enough, when used in the tea form, made by the leaves or the root has a tendency to act as a diuretic on the kidneys. Over the counter, diuretics have a tendency to suck the potassium out of the body but not the Dandelion leaves. Dandelion root tea has helped some actually avoid surgery for urinary stones. Dandelions are really just good for overall health and well being so just about anyone could benefit from a cup of dandelion tea. Many herbalists say that incorporated the Dandelion plant into dinner each night will assist in easier digestion. What Are The Benefits Of Basil?

When you take a Dandelion plant and break the stem, you will find a milky white substance inside. This substance is great for removing warts, pimples, moles, calluses, soothing of bee stings, and blisters. Some other things that Dandelion has been popular in the past for is making Dandelion jam, and others use it for a coffee substitute when it is roasted and ground Dandelion root. Many also drink Dandelion wine. Benefits of Balsam

Today, Europeans use plenty of Dandelion roots to make herbal medicines and find it hard to believe that Americans refer to this highly beneficial plant as a weed when it has such positive benefits for the liver, spleen, kidneys, bladder, and the stomach.